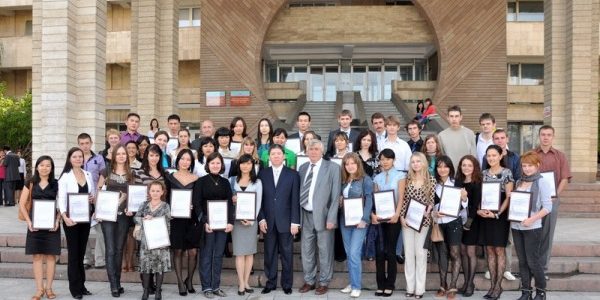 In order to ensure further sustainable functioning and priority development of the education system, including higher education, in combination with the consistent reforms in this area, on 23 March 2012 the Government of the Kyrgyz Republic by its Decree No 201 has adopted the Education Development Concept and Strategy in the Kyrgyz Republic until 2020 which consolidate values ​​and priorities, as well as create the basis for concrete steps to develop the education system, taking into account  international obligations of Kyrgyzstan.

The Ministry of Education and Science of the Kyrgyz Republic is the body of state policy and normative and legal regulation in the field of education, scientific, scientific- technical and innovative activity, intellectual property, as well as in the sphere of upbringing, social support and social protection of students and pupils of educational institutions.

During the years of independence, the number of higher education institutions has increased – from 12 in 1991 to 50 in 2016. Out of the currently active universities, 31 HEIs are public and 19 HEIs are private. Since 1991, the number of students has also increased 4-fold and amounted to 223.2 thousand in the academic year 2014/5.

Since 2012, the Kyrgyz Republic has moved to a two-tier system of higher education, which gives an opportunity to obtain a bachelor’s degree (240 credits), a master’s degree (120 credits) and a specialist degree (5 years of study, a number of medical, engineering and specialisations related to creativity).

The concept of the development of education until 2020 envisages the creation and implementation of a national qualifications structure (frameworks) to ensure quality and recognition of qualification levels, both on the domestic and foreign labour markets. The draft National Qualifications Framework provides for 9 levels (including level 5 – a short cycle, level 6 – the first cycle / bachelor’s degree, 7a – the second level / specialisation, 7b – the second level / masters’ level, levels 8-9 – the third cycle / doctoral programmes).

The state educational standards for higher professional education, approved on September 15, 2015, are based on the European qualifications framework for higher education (Dublin descriptors).

Funding of higher education in the Kyrgyz Republic is carried out on a multi-channel basis.

Higher education institutions can be public and private and have equal status regardless of the type of property and type of institution, with the exception of approaches to financing. Public and private higher education institutions pass through the state licensing procedure to begin the implementation of educational programs. Monitoring of their activities is carried out by the Ministry of Education and Science of the Kyrgyz Republic. Since September 1, 2016, the Law on Education foresees the introduction of independent accreditation, through independent accreditation agencies. Their status is recognized by the National Accreditation Council.

1. Development of the Concept of the National Qualification System of Kyrgyzstan. It is widely discussed in state bodies and academic community and now it is on status of approval in the Government of Kyrgyzstan.

2. Development of the system of accreditation of higher educational institutions.

In Kyrgyzstan the project facilitated piloting of PhD 3-years programmes at 6 higher education institutions on 11 disciplines. The project contributed into development of regulations and changes to the Law On Education on introduction of PhD.

The projects contributed to the development of a range of documents on the introduction of independent accreditation in Kyrgyzstan by the following deliveries in joint cooperation with HEREs:

These requirements have been produced by Tempus project DOQUP and disseminated to 6 universities. As a result of expertise and assessment of the DOQUP model implementation, the HERE team recommended to take this model as national model for criteria for independent accreditation.

This set of documents has been discussed and approved by deputies of the Parliament, experts, higher education institutions, accreditation agencies and officers from VET institutions etc. during the round table organized by the NE+O and ministry of education in 8 July 2015 and it has been sent to other ministries and Office of Prime Minister for agreement and expertise. It is planned that during 2017 these documents will be adopted by the Government.